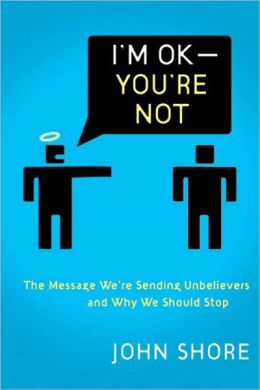 Immediately upon its publication “I’m OK–You’re Not” proved so controversial that one month after its release its publisher (NavPress) recalled it from stores and wiped it from its web site. (It continued to sell in America and abroad, however, putting its publisher in the awkward position of fulfilling orders for a book of which it was ostensibly unaware.) The central premise of “I’m OK” is that in their zeal to fulfill the Great Commission (“Therefore go and make disciples of all … “) Christians too often–and necessarily–violate Jesus’ Great Commandment (“Love your neighbor as you love yourself”). John Shore’s argument for this case–as engagingly and humorously as he makes it–is simply too powerful to ignore. And Shore doesn’t make it alone. One of the most impactful aspects of this book are the statements that conclude each of its chapters, wherein non-Christians share what it’s like for them to be the object of evangelizing Christians. Garnered from ads Shore ran on Craigslists across the country (and in the book presented under the subtitle of “Ouch”) these deeply affecting testimonies launched the trend in Christian publishing of books based on the value of Christians actually listening to what non-Christians have to say about Christians and Christianity.

“I’m OK–You’re Not” is about nothing less than the totality of the relationship between Christians and non-Christians. Shore knows what it’s like to live on both sides of the Christian river: until his sudden conversion to the faith at thirty-eight years old he could not, in his own words, “have been less of a Christian if I’d had two horns sprouting from the top of my head and carried about a trident.” “I’m OK–You’re Not” is Mr. Shore’s splendid bridge across the deep waters that too often divide Christian and non-Christian.