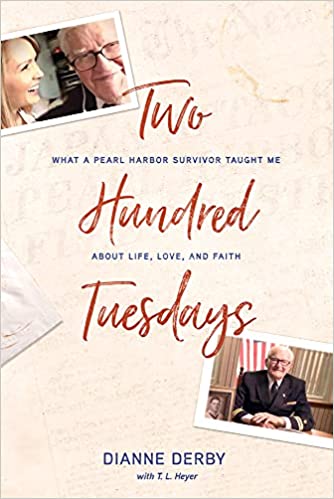 Two Hundred Tuesdays: What a Pearl Harbor Survivor Taught Me about Life, Love, and Faith

This is the story of how casual Tuesday meetings about friendship, leadership, mentoring, parenting, and marriage―and the sacred thread through it all―led to an intimate relationship with Jesus Christ.

When Dianne Derby arrived as a news anchor in Colorado Springs, she was hungry for approval, affirmation, and connections. She raced from one event to the next, capturing stories and sound bites. Everything changed when she met centenarian Jim Downing at a luncheon for World War II veterans. At the time, Jim was the second-oldest living survivor of Pearl Harbor. Jim asked Dianne an important question: “Would you like to meet the most fulfilled person you’ll ever know? You’re looking at him.”

Dianne and Jim began meeting on Tuesdays, where eventually she invited her followers into their dialogues with dozens of videos on Facebook Live, where viewers could learn from Jim just as she had. With thousands of views, the chats struck a chord with people who were hungry for a meaningful life. Over the course of five years, Jim Downing taught Dianne Derby to slow down; to embrace only what is true, real, and good; and to live a life of significance. She delivered a eulogy at his funeral, a memorial service that was broadcast for the world. His lessons live on in her stories, her friendships, and the significance of her work as a journalist, a mother, a wife, and a follower of Christ.