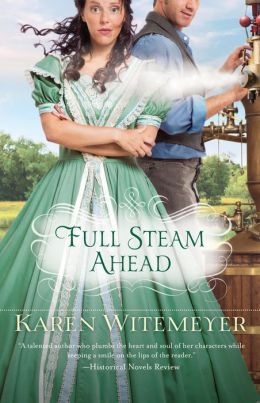 When love simmers between a reclusive scientist and a wealthy debutante, will they abandon ship or is it full steam ahead?

Nicole Renard returns home to Galveston, Texas, to find her father deathly ill. Though she loves him, Nicole’s father has always focused on what she’s not. Not male. Not married. Not able to run Renard Shipping.

Vowing to find a suitable husband to give her father the heir he desires before it’s too late, Nicole sets out with the Renard family’s greatest treasure as her dowry: the highly coveted Lafitte Dagger. But her father’s rivals come after the dagger, forcing a change in Nicole’s plans.

After a boiler explosion aboard the Louisiana nearly took his life, Darius Thornton has been a man obsessed. He will do anything to stop even one more steamship disaster. Even if it means letting a female secretary into his secluded world.

Nicole is determined not to let her odd employer scare her off with his explosive experiments, yet when respect and mutual attraction grow between them, a new fear arises. How can she acquire an heir for her father when her heart belongs to another? And when her father’s rivals discover her hiding place, will she have to choose between that love and her family’s legacy?