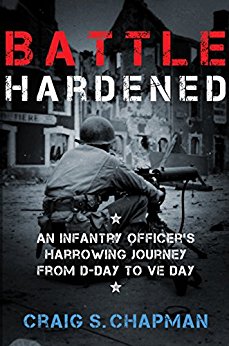 Battle-Hardened: An Infantry Officer’s Harrowing Journey from D-Day to VE-Day tells the story of an American soldier’s growth from a 2nd Lieutenant eager to prove his worth in battle to a skilled and resolute commander over the course of the Northern European Campaign. Craig Chapman delves deep into the personal recollections and mental state of Bill Chapman as he fought against the Nazis, enduring frontline combat and witnessing horror on a massive scale. Lieutenant Chapman maintains his sanity by isolating his emotions from the chaos of the battlefield, and the young officer turns into a hard-edged warrior who dispassionately orders men to risk their lives yet still manages to hold onto his humanity.