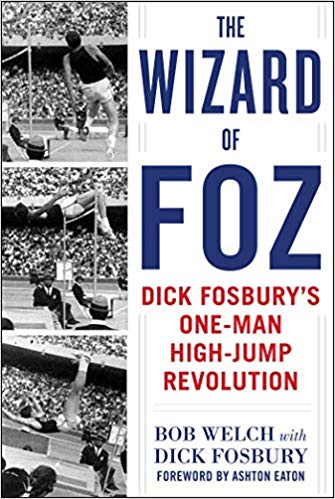 In 1968, a US Olympic men’s track and field team—America’s best ever—stirred the world in unprecedented ways, among them the victory stand black rights protest by Tommy Smith and John Carlos at the Games in Mexico City. But in competition, no single athlete captured the ’60s more perfectly than Dick Fosbury, a failed Oregon prep high jumper who—in the wake of his little brother being killed by a drunk driver while the two were riding bikes and the subsequent divorce of his parents—invented a high jump style as a high school sophomore that ultimately won him an Olympic gold medal and revolutionized the event. No jumpers today use any other style than his.

The Wizard of Foz is a story of innovation and imagination that blossoms 7,350 feet up in the High Sierra, where boulders and 100-foot trees festoon the interior of the Olympic Trials track. It is a story of loss, survival, and triumph, entwined in a person—Fosbury—and a time—the ’60s—clearly made for each other. And it is a story of a young man who refused to listen to those who laughed at him, those who doubted him, and those who tried to make him into someone he wasn’t.