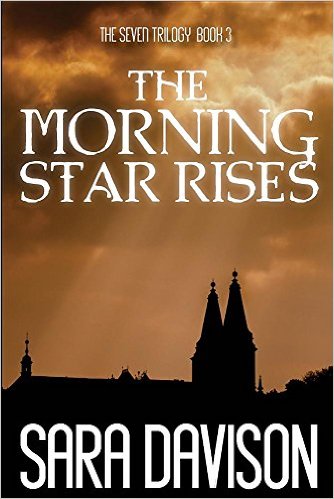 Jesse Christensen is out of the army, but the real battle has just begun. As martial law continues in Canada in 2054, Major Gallagher has taken over the city. His oppression of believers intensifies in response to a so-called radical Christian group that claims responsibility for more terrorist attacks. But is Gallagher acting in a professional capacity, or is he carrying out a personal vendetta?

Meryn O’Reilly faces a dark and uncertain future after shocking revelations devastate her life. She is determined to follow God’s call, but her plans could cost her everything. She and Jesse struggle to surrender everything to a God who is always in control, even when circumstances suggest otherwise.

With the world descending into chaos around them, Meryn and Jesse face the greatest barrier to their love yet–a barrier that may prove too strong to breach.

The final installment of Davison’s Seven trilogy does not disappoint. The sense of foreboding is palpable …. Davison answers many mysteries presented throughout the series, all culminating in a shocking and satisfying end.”

“The Morning Star Rises is a deeply satisfying conclusion to Sara Davison’s Seven trilogy. Full of twists and turns, equal parts suspense and romance, it keeps you guessing till the end. Davison has created a believable world that turns the tables on today’s most pressing issues, and peopled that world with vivid, heartbreakingly real characters. A thoroughly enjoyable read.”

–ERIN E.M. HATTON, Award-Winning Author of Across the Deep

“Another thrilling read from Sara Davison. Thrust into the midst of intrigue, terror, and a heartrending love story, you will sit on the edge of your seat. Sara propels the reader into the battle between good and evil, where Christians must choose–Christ or their life. Don’t miss this final episode in the Seven trilogy.”