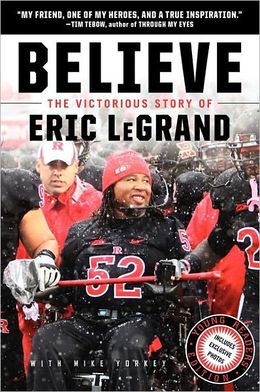 On October 16, 2010, Eric LeGrand’s life drastically changed course in a single moment. Eric was known for his skill as a key Rutgers defensive lineman and as a much-loved teammate who could make anyone smile.

During the heated fourth quarter of a tie game against Army, a crushing tackle left Eric sprawled motionless on the ground while the entire stadium went silent with fear and anticipation. Doctors later discovered that Eric’s body was paralyzed from the neck down, marking the beginning of a long, grueling, and emotional road to recovery.

What Eric didn’t know then, however, was that the months to come would be a remarkable, transformative journey—one so profound that he would call the time since his accident the best years of his life.

In this moving memoir, Eric tells the uplifting story of how he is rebuilding his future in the face of hardship. Doctors said that he would never again breathe without a ventilator. Five weeks later, though, he astonished them by drawing breath on his own. He thrilled fans only months later by posting a picture of himself online standing with support during a rehabilitation session. A year after the accident, the nation watched as he led his Rutgers teammates onto the field in his wheelchair—a powerful gesture that was voted best sports moment of 2011 by Sports Illustrated readers.

Now, Eric is on his way to graduating from Rutgers University, has a budding career as a sports broadcaster, and uses his experience to spread a message of belief and positivity. He also joined the roster of the Tampa Bay Buccaneers in May 2012 in a symbolic move that recognized his “character, spirit, and perseverance,” said Bucs head coach Greg Schiano.

Though Eric relies on his family, friends, and faith, his belief and hope for a better future make him a role model for anyone who has experienced tragedy or faced daunting obstacles. Believe is a story of finding purpose in pain and facing setbacks with strength.