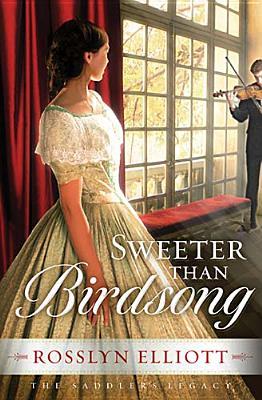 Music offers Kate sweet refuge from her troubles . . . but real freedom is sweeter.

In Westerville, Ohio, 1855, Kate Winter’s dreams are almost within reach. As the first woman to graduate from Otterbein College, she’ll be guaranteed her deepest wish: escape from the dark secret haunting her family. But with her mother determined to marry her off to a wealthy man, Kate must face reality. She has to run. Now. And she has the perfect plan. Join the upcoming musical performance—and use it to mask her flight.

Ben Hanby, Otterbein College’s musical genius, sees Kate Winter as an enigmatic creature, notable for her beauty, yet painfully shy. Then he hears her sing—and the glory of her voice moves him as never before. He determines to cast her in his musical and uncover the mystery that is Kate. Still, he must keep his own secret to himself. Not even this intriguing woman can know that his passionate faith is driving him to aid fugitives on the Underground Railroad.

A terrifying accident brings Kate and Ben together, but threatens to shatter both their secrets and their dreams. Kate can no longer deny the need to find her courage—and her voice—if she is to sing a new song for their future.

A stirring novel of hope and faith inspired by real events—from the author of Fairer than Morning, winner of the 2011 Laurel Award.