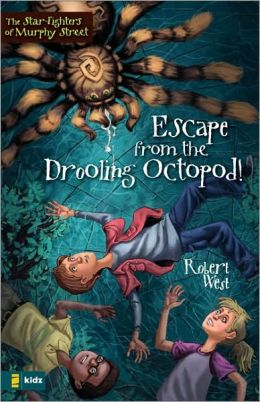 Escape From The Drooling Octopod!

Know Your Star-Fighters Beamer: California transplant to a weird Midwestern town. Feels like he’s living on another planet. Scilla: the gangly tomboy next door. Ghoulie: the class nerd. Add one spaceship-shaped tree house capable of taking them most anywhere in the universe. Hop in and blast off for fantastic outer space adventures in Star-Fighters of Murphy Street—the quirky, funny, fast-paced new trilogy by Robert West.

In Episode Three, The Star-Fighters, under attack from pink goblins and Molgotha, a drooling giant octopod, must save a girl locked in a ‘pink palace.’ In a wacky adventure which takes them to a pink planet, through subterranean civilizations and into a modern day Dr. Frankenstein’s laboratory, the Star-Fighters discover a dark secret and find beauty in the most unlikely beasts.