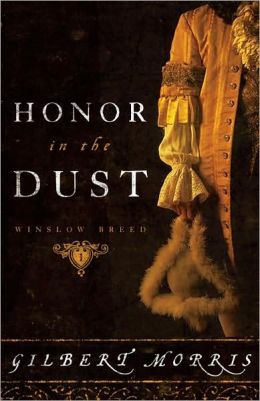 Honor In The Dust

The grandfather of Christian fiction returns with the story of what happened to the winslow family during an earlier era when the Tudors reigned—tracing the doomed rise of Stuart Winslow within the salacious court of King Henry VIII.

The determined Stuart Winslow will go to any lengths to lift himself and his widowed mother out of poverty. After a distant relative manages to secure a place for Stuart in the court of King Henry VIII, Stuart quickly learns that the court is really a wicked cauldron of vices, power plays, and temptation. As Stuart rises at court, he is asked to find and deliver for execution an enemy of the king—William Tyndale, an acquaintance of Stuart’s whose sole ambition is to translate the Bible into the language of the common man. Does Stuart fall prey to his dangerous ambition and accept the assignment? Or is he willing to face death at the stake for the sake of Christ?

In Honor in the Dust, bestselling author Gilbert Morris captures the tone of the Tudor period beautifully, chronicling the period’s excesses with skill and prudence. But like Morris’s other novels, it also contrasts those excesses with the godly behavior of real-life characters like William Tyndale. In this captivating historical drama, Stuart Winslow is caught between two worlds: one that promises material and worldly success, and one that promises salvation. Is his faith strong enough to withstand such a challenge?