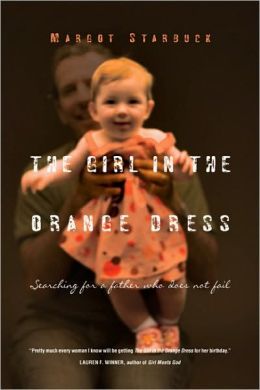 The Girl in the Orange Dress

“Chosen.” “Special.” Those are the words Margot Starbuck used to describe herself as a child adopted into a loving family. And when her adoptive parents divorced, her dad moved east, and her mom and dad each got remarried, she told herself that she was extra loved, since she had more than two parents and people in different times zones who cared about her.But the word she really believed about herself was rejected. First by her birthparents. Then by her adoptive father-when he moved away. Then by her stepfather. Then by her birthfather a second time, when she tried to invite him into her life.

Most of all, Margot felt rejected by God the Father, who she also suspected could not be trusted.

With a good dose of humor and a willingness not to take herself too seriously, Margot Starbuck offers us an exuberant, frank and, at times, poignant romp as she searches for the Father who will not fail. You are invited to come along.