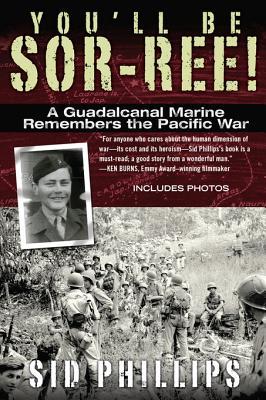 Sid Phillips knew he was a long way from his home in Mobile, Alabama, when he plunged into the jungles of Guadalcanal in August 1942…
A mortarman with H-2-1 of the legendary 1st Marine Division, Sid was only seventeen years old when he entered combat with the Japanese. Some two years later, when he returned home, the island fighting on Guadalcanal and Cape Gloucester had turned Sid into an “Old Timer” by Marine standards, and more: he left as a boy, but came home a man.

These are his memoirs, the humble and candid tales that Sid collected during a Pacific odyssey spanning half the globe, from the grueling boot camp at Parris Island, to the coconut groves of Guadalcanal, to the romantic respite of Australia. In this true story, Sid recalls his encounters with icons like Chesty Puller, General Vandergrift, Eleanor Roosevelt, and his boyhood friend, Eugene Sledge. Here, he remembers the rain of steel from Japanese bombers and battleships, the brutality of the tropical elements, and the haunting notion of being expendable.

This is the story of how Sid stood shoulder to shoulder with his Marine brothers to discover the inner strength and deep faith necessary to survive the dark, early days, of WWII in the Pacific.