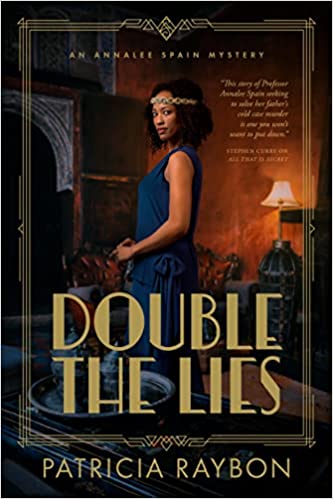 In the cold and dangerous spring of 1924, amateur detective Annalee Spain races the clock to solve the murder of a handsome barnstorming pilot before the clever Black theologian―a target of the ruthless Colorado Klan―is framed for the crime, and before she is lured by the risky flirtations of the victim’s dashing twin brother.

As this second installment of Patricia Raybon’s critically acclaimed mystery series opens, Annalee Spain offers her fancy lace handkerchief―a gift from her complicated pastor boyfriend, Jack Blake―to a young woman crying in a Denver public library. But later that night, when police find the handkerchief next to the body of the young woman’s murdered husband, Annalee becomes the number one suspect, and her panic doubles when she learns that Jack has gone missing.

With just days to solve the murder before the city’s Klan-run police frame her for the crime, Annalee finds herself hunting for clues in the Colorado mountain town of Estes Park. She questions the victim’s wife and her uncle, a wealthy Denver banker, at their mountain lodge, desperate for leads. Instead, she finds a household full of suspects and even more burning questions. Who keeps threatening her, why can’t she find Jack, and will a dangerous flirtation be her undoing? Her answers plumb the depths of the human heart, including her own, exploring long-buried secrets, family lies, even city politics―all of which could cost the young detective her fledgling love . . . and perhaps even her life.