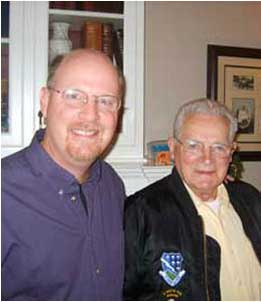 WordServe President Greg Johnson has always been a bit of a war junkie, especially as it related to movies and books. “I own, um, A LOT of each. Mainly the Civil War and WWII eras, but I’ve branched out significantly to the other main conflicts. Never having to serve somehow made me more appreciative of the sacrifices of the men and women who did. My brother served for 21 years in the Navy, and I had a great uncle in WWII.

“I first read Band of Brothers by Stephen Ambrose in 2001. I was captured by the stories of these normal guys who did their duty, gave up years of their lives, and went on to preserve freedom for the world. They were heroes to me! And then the “Band of Brothers” HBO ten-part mini-series came out. I was mesmerized. When the DVD set came out, I couldn’t get to Best Buy quick enough. Between watching it on DVD and seeing it on The History Channel, I’ve likely seen all ten episodes twenty times (or more). And while “The Pacific” was different in many ways, it was a fairly accurate portrayal of war in the Pacific.

“Late in 2006, an old friend from Oregon told me he had a friend, who knew two of the originals: Buck Compton and Don Malarkey. Both were at about age 85, in good health, and… they were both interested in writing their story. Within a week I was on a plane to the Northwest to meet with Buck Compton (with all-star collaborator, Marcus Brotherton) and Don Malarkey (with award-winning newspaper columnist and author Bob Welch). The matches were made, the deals were struck, and the collaborators went to work on killer proposals.

“Buck, who sadly passed away in 2012, published with Berkley/Caliber for a May 2008 release of his book, Call of Duty. And Don signed with St. Martins Press for a June 2008 release. As an agent, it’s always fun to work on projects that match your interests. But when you have the chance to meet with actual heroes; men who put it all on the line, and then have the opportunity to serve them… it’s just very special. After both books were published, I was invited to the 2008 Easy Company reunion in Salem, Ore., where I met another dozen of these great men.”

Because of the success of these books, many others have gone on to do equally as well.

Marcus Brotherton has taken up the mantle to continue to tell the stories of these heroes. He was able to secure the untold stories of 20 more Easy Company soldiers, who not only willingly participated in the book, but who were cut into the ongoing royalties (thanks to the generosity of Marcus). We Who Are Alive and Remain came out in May of 2009 and promptly spent 5 weeks on the New York Times hard cover non-fiction extended bestseller list, hovering between #28 and #34. It has gone on to sell nearly 100,000 copies.

Along the way, we had a feeling that there was one more story that needed to be told… Shifty Powers. A fan favorite, this quiet and unassuming West Virginia warrior just had a way about him in how he told his stories from the war. Sadly, he passed away in 2009, but before he did, he told his stories on video and audio tape, more than enough to fill a book. So in May of 2011, Shifty’s War, the authorized biography from the family of Shifty Powers released (also from Berkley Caliber). Marcus Brotherton again wrote this book that many are already saying may be the best yet.

In 2012 we were privileged to represent Dr. Sid Phillips in his memoir called You’ll Be Sor-ree.  Chuck Tatum in his memoir Red Blood, Black Sand. Both were published through Berkley Caliber. Their characters were a major part of the HBO series “The Pacific.”

Soon after this, we were able to represent two books by Adam Makos. A Higher Call spent 16 weeks on various New York Times bestseller lists and has sold more than 350,000 copies to date. Voice of the Pacific (written with Marcus Brotherton) has sold more than 75,000 copies.

In 2016, we represented Donald Stratton’s All the Gallant Men, the first memoir by a survivor of the USS Arizona at Pearl Harbor. Stratton, one of the battleship’s five living heroes, delivers an “epic,” “powerful,” and “intimate” eyewitness account of Pearl Harbor and his unforgettable return to the fight. The book immediately hit the New York Times bestseller list and stayed there for five weeks.

Our agency has represented all of the book below in the history/military category, with more books under contract and coming out in the months ahead. This is a major part of our business and we’re looking at all submissions in these categories.

BOOKS IN THIS GENRE