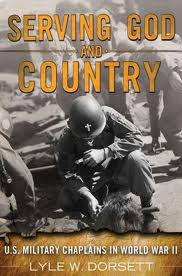 In World War II, over 12,000 Protestant ministers, Catholic priests, and Jewish rabbis left the safety of home to join the Chaplain Corps, following the armed forces into battle across Europe, Asia, North Africa, and the high seas.
They were officers who displayed uncommon courage and sacrifice. They were men of faith under fire.

Representing America’s three major religious traditions, thousands of volunteers from across the country enlisted as non-combatant commissioned officers to provide spiritual strength and guidance for those fighting men who never knew if they were going to survive to see another day.

Armed only with Bibles, Torahs, and the tools of their holy trade, these men of God went wherever the troops went—from the bloody beaches of the Normandy Invasion to the hellish jungles of Guadalcanal and Okinawa in the Pacific. They prayed over men about to march into combat on land, sailors facing Kamikaze attacks at sea, and bomber crews who could neither retreat nor surrender in the air. And, most important and difficult of all, they guided fallen fighting men of every faith as they breathed their last, and gave up their lives in the fight against tyranny.

These are the personal stories of some of the bravest and most selfless men who served with the armed forces. Many lost their lives or suffered debilitating wounds while serving as pastors to the troops. All of them battled the pain of separation from their own loved ones as they gave some of the best years of their lives to keep the military personnel spiritually awake, morally fit—and prepared to make the journey from this world to the next without fear or despair, and with the trust of the Almighty in their hearts.