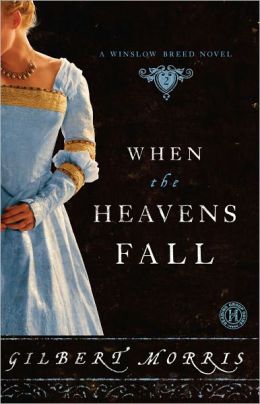 When The Heavens Fall

Brandon Winslow would rather gamble and frequent taverns than attend church. So how does he find himself at the forefront of the resistance to Bloody Mary’s attempt to eliminate—at sword’s point, if need be—the Protestant faith?

During the reign of Mary I of England—”Bloody Mary”—young Brandon Winslow (son of Stuart, protagonist of Honor in the Dust, the first book in the Winslow Breed series) finds himself in dire straits. After being flogged and then drummed out of the military for seducing the wife of his commanding officer, he sinks into a life of gambling and petty fraud along with Lupa, the fair gypsy woman who nursed him back to health.

After Mary weds Prince Philip of Spain, she begins to work in earnest to establish Catholicism as the only faith in England—and to execute Protestants. When Brandon sees several people burned at the stake in London for their faith, the experience changes him: Even though he has been only a nominal member of the Church of England, he finds himself compelled to stop those responsible for these outrages—and to do so before his uncle Quentin, a pastor, is himself burned at the stake. Unfortunately, the only way to save Quentin and so many others is to make Princess Elizabeth (who is herself in danger of dying at Mary’s hand) queen. And that, of course, would be treason. Punishable by death.

But then, Brandon has always been a gambler . . .