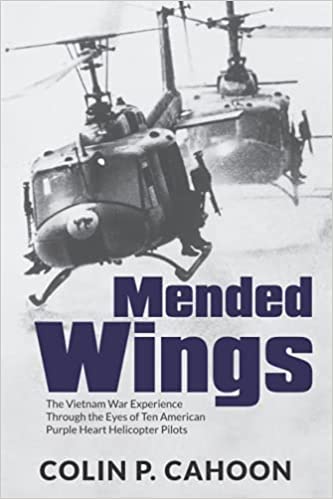 When courage, guts and loyalty merge, you’ll find Army helicopter pilots fighting in Vietnam, committed to each other beyond measure. This is their story. Buckle up.
— Admiral Thomas B. Hayward, Chief of Naval Ops 1978-1982, USN Ret

Mended Wings has the full flavor of that long ago war from the dangers to the messiness that is part of war.
— Ambassador (Ret) Ronald E. Neumann, USA Lieutenant Vietnam

Mended Wings is a great snapshot in the timeline of the Helicopter War in Vietnam.
It is a humanization of the sky soldiers who piloted and crewed these amazing aircraft.
I was transported back to Vietnam.
— Lt Col Eldridge Johnson, Vietnam War Helicopter Pilot, USAF Ret

You hear them first, the “whop, whop” sound of rotor blades chopping through the humid Vietnam air. Suddenly they appear, screaming toward the landing zone at treetop level. Gunships launch rockets into the nearby tree line. The resulting explosions announce the arrival of the lift helicopters, pointing their noses skyward like falcons coming out of a dive for landing. Unseen enemy respond with machinegun fire, spewing orange tracers toward the slowing birds. Bullets rip into the thin aluminum skin and plastic that surrounds the men who fly these machines. But on they come, determined to complete the mission no matter what the cost. When one pilot is hit, the other takes the controls and carries on. When one helicopter crashes in flames, the pilots in the others maintain formation and push ahead. Nothing deters these warriors, volunteers all, from flying on with the tenaciousness of zealots.

Who are these men? Where did they come from? Where have they gone?

Mended Wings is their story. Follow the lives of ten Purple Heart heroes as they relate the Vietnam War experience from the perspective of the helicopter cockpit. Get to know the generation of men who fought with pride, determination, skill, and courage only to be shunned when they brought their battered bodies and haunting memories home. Their fathers and uncles were heralded as the “greatest generation.” Meet the forgotten generation. Meet the men whose stories did not end as a name on a black wall in Washington D.C. Meet the survivors.