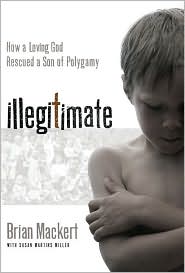 The recent events at a Fundamentalist Church of Jesus Christ of Latter-Day Saints (FLDS Church) compound in Texas have ignited a national dialogue on religious sects. Fundamentalist Mormon sects formed as splinter groups of the mainstream LDS Church exist in a world far removed from mainstream American culture: a world of abuse and twisted theology that seems too bizarre to be true.
Yet for Brian Mackert, life inside this sect was all too real. As a son in a family of one father, four wives, and 31 children, Brian experienced firsthand the devastating realities of polygamous cults.

Now Brian tells his remarkable story of tragedy and healing. Illegitimate takes readers behind today’s shocking headlines and inside the walls of this controversial sect. Brian reveals a world of loving mothers and abusive fathers, devoted children and sibling rivalry, deceptive religion and the truth eventually found in Christ–outside the walls of the FLDS. Ultimately, Illegitimate demonstrates the incredible love of God, and His ability to bring light into the darkest of places.