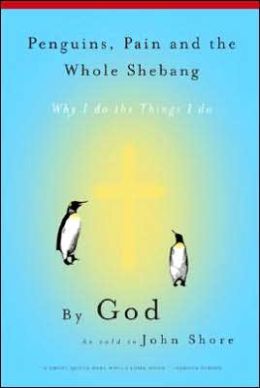 Penguins, Pain And The Whole Shebang

One year after his sudden and utterly out-of-the-blue conversion to Christianity (which he describes in the riveting afterword of this book), John Shore reportedly found himself overwhelmed by the desire to write something that Christians could give to non-Christians by way of proving that just because one is Christian doesn’t automatically mean that one is irrational. The result is the delightfully profound “‘Penguins, Pain and the Whole Shebang: Why I Do the Things I Do,’ by God (as told to John Shore),” in which God (who, it turns out, is excruciatingly funny: who knew?) directly answers the dozen objections to Christianity most typically raised by non-Christians. The book’s opening dialogue between God and the archangel Michael on the eve before God introduces Adam onto planet earth is worth the price alone.

There is no finer, accessible, or creative Christian apologetic. This is the book for which Mr. Shore is most likely to be remembered.