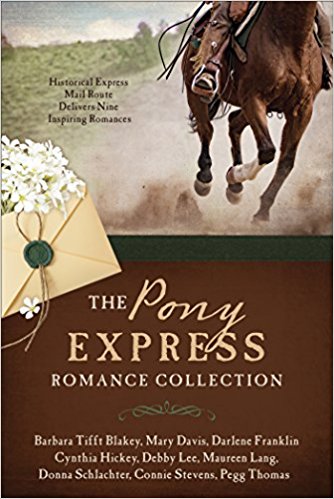 Join the race from Missouri, across the plains and mountains to California and back again as brave Pony Express riders and their supporters along the route work to get mail across country in just ten days. It is an outstanding task in the years 1860 to 1861, and only a few are up to the job. Faced with challenges of terrain, weather, hostile natives, sickness, and more, can these adventurous pioneers hold fast, and can they also find lasting love in the midst of daily trials?

A Place to Belong by Barbara Tifft Blakey
An Express rider promises to help fulfill Abigail’s dream to return to her childhood home. Jacob doesn’t trust him, but what other option does she have?

An Unlikely Hero by Mary Davis
BethAnn along with her little sister are running from a mistake and find security at a Pony Express station and love in the quiet affection of a shy Pony Express rider.

The Gambler’s Daughter by Darlene Franklin
Gambling debts drive Caroline Adams’s estranged father away from the Chelan Swing Station before her arrival. Can his replacement conquer the temptations goading them both to prove himself worthy of Caroline’s love?

Her Lonely Heart by Cynthia Hickey
Widow Sadie Mathewson wants to find love again. But when an injured pony express rider shows up at her station, love finds her in an unexpected way.

My Dear Adora by Maureen Lang
Chip Nolan must dispatch the letters his brother can’t after being left for dead on the Pony Express trail. One letter stands out, addressed to “My Dear Adora”— stirring Chip’s heart before he even meets its recipient.

Ride into My Heart by Debby Lee
Kimimela works at a Pony Express station where she struggles to cope with the death of her sister. When she’s kidnapped by gun smugglers, can her friend, Pony Express rider Gabe, rescue her in time?

Echoes of the Heart by Donna Schlachter
A mail order bride. A crippled stationmaster. No way out for either of them—except with each other. Can they surrender their hearts and find true love?

Abundance of the Heart by Connie Stevens
Unfulfilled goals haunt Fletcher and Mercy at a remote Nebraska outpost, but unexpected circumstances may offer a last-chance opportunity to pursue the dream of riding for the Pony Express.

Embattled Hearts by Pegg Thomas
Alannah Fagan escaped from a battle she wouldn’t survive. Stewart McCann left behind a battle he couldn’t face. Thrown together at Horseshoe Station, can they find something worth fighting for?