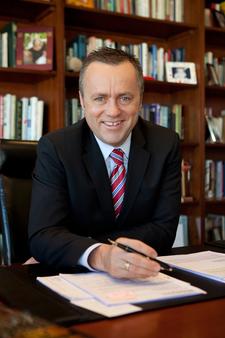 Dr. Barry H. Corey became the eighth president of Biola University on July 1, 2007, officially launching the celebration of the university’s centennial year. He succeeded Clyde Cook, who retired as one of the longest-standing college presidents in the nation, serving Biola for 25 years.

Programs developed under President Corey’s administration at Biola include the Biola University Center for Christian Thought; the Center for Christianity, Culture and the Arts; the annual Imagination Summit event; and Open Biola — an online database for free educational content created and curated by Biola University. President Corey has overseen the launch of the School of Education and the introduction of online learning. Under his leadership, Biola has seen the highest enrollment in the university’s 105-year history, with the construction of new facilities to serve the needs of the campus. President Corey has led the university into its second century with the launching of an ambitious, 10-year University Plan (2012-2022) and the largest comprehensive fundraising campaign in the school’s history, entitled A Soul of Conviction and a Voice of Courage, following themes from his inaugural address in November of 2007.

Corey was a Fulbright Scholar with Bangladesh Rural Advancement Committee and lived in Bangladesh among the rural poor from 1990 to 1991. He has also completed two Boston Marathons, one in 2004 and one in 2006.

An ordained minister, Corey served from 1993 to 2000 as pastor of The Greek Evangelical Church of Boston’s English congregation.

He and his wife, Paula, have three children: Anders, Ella and Samuel.

Corey has signed a one book contract with Tyndale Publishers for his book, The Receivable Life, due out in Spring of 2016!