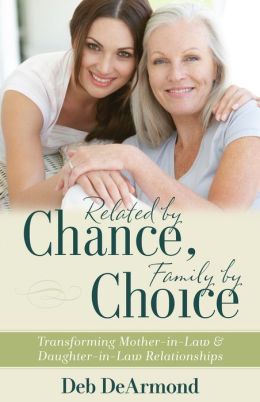 Related By Chance, Family By Choice

The caricatures are everywhere, the jokes are inexhaustible, and the stereotypes fill the screens. From Marie Barone (Everyone Loves Raymond) to Viola Fields (Monster-in-Law) to Internet sites and social media pages like ihatemyinlaws.com and a Facebook page for ihatemymotherinlaw there is no shortage of examples of the caustic relationships that can develop between the two women in a man’s life.

Deb DeArmond and her three daughters-in-law have conducted their own exhaustive research into the status of the women-in-law relationship. Their research, which incorporated online surveys, interviews, and discussions, included asking about the faith factor in the relationships they studied. Of the respondents, nearly 90 percent claimed they were Christians, and 79 percent said their faith was foundational and guided their actions and decisions. As discouraging as it may be, the numbers of those they surveyed who reported that their women-in-law relationships were “bad” were nearly identical to those in a survey conducted by a popular secular website that recorded no statistics on faith.

Beyond the statistics and their analysis, Deb brings to this book more than thirty years working with adults to improve communications and deal constructively with conflict. Aside from her research and her professional expertise, perhaps the most important asset Deb brings to this work is her own relationship with her three daughters-in-law that is so obviously and unusually positive that she—and they—are often asked to explain the secret of the relationships they share.

This practical and unapologetically scriptural book covers issues of personal perceptions, strained communication, the roles of sons and fathers in the relationship’s success, how to begin these relationships on the right foot, and the necessity of trust and love. Deb’s one motivating objective is to help women-in-law move from women who are simply related to strong and confident members of a truly spiritual family.