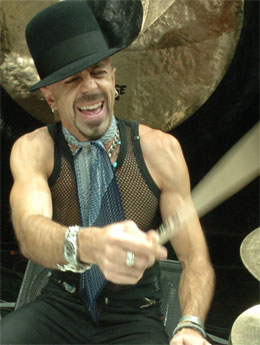 Zoro is an internationally known rock star and the consummate definition of the rare man who marches to the beat of a different drum. One of the world’s most renowned and respected drummers, he has toured and recorded with Lenny Kravitz, Bobby Brown, Frankie Valli and the Four Seasons, The New Edition, Jody Watley, Sean Lennon, Philip Bailey, and Lisa Marie Presley, among many others.

Zoro’s worldwide appeal is evident from his numerous awards and accolades. He is consistently voted “#1 R&B Drummer & Educator” in Modern Drummer, Drum! and Rhythm magazines. Zoro’s best-selling book and DVD, The Commandments of R&B Drumming, were awarded the prestigious, “#1 Best Educational Products Title” in the Modern Drummer and Rhythm Magazine reader’s polls. He is also featured on the celebrated DVD release, Modern Drummer Festival 2005 (Hudson Music).

The author of several books, his current work-in-progress is destined to provide inspiration to readers of all ages for the fulfillment of dreams.

Zoro’s latest book is The Big Gig, a book on how to make it in the music industry.