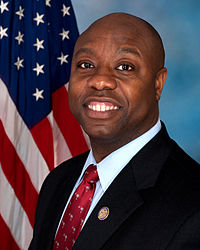 United States Senator Tim Scott is working daily to ensure that every American has the opportunity to succeed. Growing up poor in a single parent household in North Charleston, South Carolina, Tim learned the importance of faith, hard work, and living within your means. With the same determination he brings to advancing conservative principles in the Senate, Scott grew from his humble beginnings to build one of the most successful Allstate agencies in South Carolina.

An unbridled optimist, Senator Scott believes that despite our current challenges, our nation’s brightest days are ahead of us. As a teenager, Tim had the fortune of meeting a strong, conservative mentor, John Moniz. Moniz helped instill in Tim the notion that you can think your way out of poverty, and that the golden opportunity is always right around the corner. The American Dream is alive and well, and Tim’s story is a concrete example of that.

Senator Scott was sworn in to the U.S. Senate in January 2013. He has launched his Opportunity Agenda, which includes tax reform to increase economic freedom, expanding school choice so every child has a chance at a quality education, and providing alternatives for single parents to work their forty hours a week by allowing for wider use of comp time.

Prior to being sworn in to the Senate, Senator Scott served in the United States House of Representatives from 2011-2013, where he was a member of House leadership and sat on the influential House Rules Committee. Tim also served on Charleston County Council for 13 years, including four terms as Chair and in the South Carolina House of Representatives for two years where he was elected Chairman of the Freshman Caucus and House Whip.