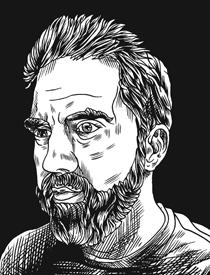 Joshua Kemble is a full-time art director, freelance illustrator, and Xeric Award-winning cartoonist. He writes and illustrates his own comic books, while creating freelance illustrations for t-shirts, magazines and other media. His illustration clients have ranged from Scholastic to Random House, and his comic work has been published in various
anthologies and self-published mini-comics. Kemble’s writing explores the intersection of total depravity and faith, memoir, and politics within the graphic novel artform.

An unabashed comic book geek, Joshua was born in 1980 in Tarzana, California, and grew up in the Antelope Valley. He received his BFA and MFA in Illustration from California State University of Long Beach and resides in Lancaster, CA, with his wife and fellow artist, Mai S. Kemble, and son Benjamin.

He occasionally teaches college art courses in design and illustration, was co-host of illustration podcast Big Illustration Party Time, and now co-hosts both The Artcasters and 48-Hour Art Check. He is a member of the Los Angeles Chapter of the National Cartoonist’s Society. You can check Josh’s work out at joshuakemble.com