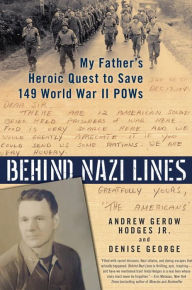 In 1944, hundreds of Allied soldiers were trapped in POW camps in occupied France. The odds of their survival were long. The odds of escaping, even longer. But one-man had the courage to fight the odds . . .

An elite British S.A.S. operative on an assassination mission gone wrong. A Jewish New Yorker injured in a Nazi ambush. An eighteen-year-old Gary Cooper lookalike from Mobile, Alabama. These men and hundreds of other soldiers found themselves in the prisoner-of-war camps off the Atlantic coast of occupied France, fighting brutal conditions and unsympathetic captors. But, miraculously, local villagers were able to smuggle out a message from the camp, one that reached the Allies and sparked a remarkable quest by an unlikely—and truly inspiring—hero.

Andy Hodges had been excluded from military service due to a lingering shoulder injury from his college-football days. Devastated but determined, Andy refused to sit at home while his fellow Americans risked their lives, so he joined the Red Cross, volunteering for the toughest assignments on the most dangerous battlefields. In the fall of 1944, Andy was tapped for what sounded like a suicide mission: a desperate attempt to aid the Allied POWs in occupied France—alone and unarmed, matching his wits against the Nazi war machine.

Despite the likelihood of failure, Andy did far more than deliver much-needed supplies. By the end of the year, he had negotiated the release of an unprecedented 149 prisoners—leaving no one behind. This is the true story of one man’s selflessness, ingenuity, and victory in the face of impossible adversity.