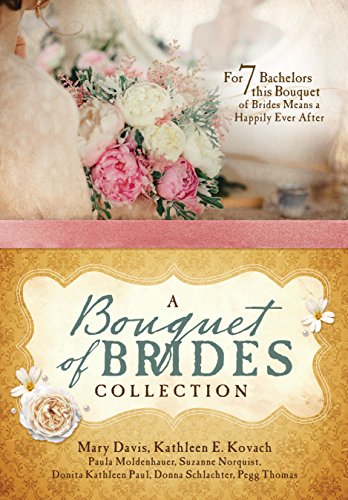 A Bouquet of Brides Romance Collection

A bouquet of brides is picked for love.
Meet seven American women who were named for various flowers but struggle to bloom where God planted them. Can love help them grow to their full potential?

Holly and Ivy by Mary Davis (1890, Washington State)
At Christmastime, Holly Harrison accompanies her impetuous younger sister on her trip across the country to be a mail-order bride. But even as she tries to persuade her sister that loving a stranger is foolhardy, Holly loses her own heart to a fellow traveler.

Periwinkle in the Park by Kathleen Kovach (1910, Colorado)
Periwinkle Winfield is a hiking guide helping to commission a national park. But a run-in with a mountain man who is determined to keep the government off his land may place her in great danger.

At Home with Daffodils by Paula Moldenhauer (1909, Oklahoma)
When her childhood sweetheart returns to town, will Dilly Douglas accept the worthy heart he offers, or will the old wound he opens keep them apart?

A Song for Rose by Suzanne Norquist (1882, Rockledge, Colorado)
Can Patrick O’Donnell, a tenor disillusioned by the performance industry, convince Rose Miller that there is more to music than her dream of joining an opera company?

Beauty in a Tansy? by Donita K. Paul (1918, South Dakota)
Tansy Terrell was named after a weed. When she opens shop next door, Arthur Blake recognizes Tansy’s need to be valued as a beautiful flower but fails to see his own worth as a maker of instruments and music.

A Prickly Affair by Donna Schlachter (1885, Arizona)
A rough-and-tumble cowgirl, “Cactus” Lil Duncan longs for true love but is afraid to let down her prickly exterior when a city slicker from New York City, with less-than-honorable intentions, tries to win her heart and her hand.

In Sheep’s Clothing by Pegg Thomas (1702, Connecticut)
Peter Maltby might be all good looks and charm, working in the new mill fulling wool, but Yarrow Fenn fears he is the Crown’s agent in disguise who will destroy the only livelihood she has.