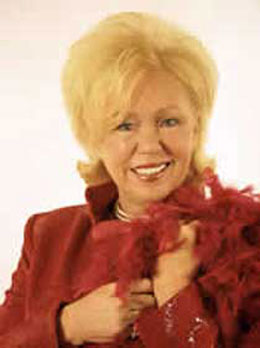 When best selling children’s author Sue Buchanan thought her life was over, it was really just beginning. Diagnosed with breast cancer and saddled with a grim prognosis, conventional thinking would have told her she was as good as gone. However, Sue is anything but conventional! Now, after more than 22 years cancer-free, Sue spreads her crazy brand of hope, and humor wherever she goes.

What might have been Sue’s epitaph was instead the catapult that launched a new world of opportunities. Her triumph over the disease and her new lease on life, are chronicled in her book, I’m Alive and the Doctor’s Dead, and that was only the beginning. Today she maintains a full itinerary of speaking engagements and has authored numerous other books. Sue encourages her listeners to face a crisis head-on, then reclaim their lives and come out on the other side enriched… and hopefully laughing!

Beyond her claim to fame as a true survivor, Sue Buchanan’s self-proclaimed spiritual gift is exaggeration. Her flamboyant sense of style (which sometimes includes color feather boas) is as much a part of her persona as her tell-it-like-it-is delivery. Outrageous and overstated? Perhaps. But don’t let that dumb-blond act fool you. Sue is also a savvy businesswoman. Prior to her “second life” as a writer and speaker, she served as vice president of Dynamic Media, Inc., a company specializing in computer authoring, video production and corporate meeting planning. Their clients included several Fortune 500 companies.

Rather than a speaker, Sue prefers to call herself a cheerleader and in that role has been sponsored by such groups as The Susan G. Komen Foundation, American Association of University Women, The American Cancer Society, Glaxo and Amgen Pharmaceuticals, Eli Lilly, and other medical and civic groups. She is available for Christian women’s conferences and retreats, with such topics as “A Party Begins in the Heart,” “If I Can Write a Book, You Can Write a Book” and “I Don’t Know Whether to Pray or Eat a Two-Pound Box of Chocolates.” Sue’s message is simple: “One of God’s best gifts is the gift of laughter!”

Sue is also the “gossip columnist” for Homecoming Magazine! Sue lives in Nashville, Tennessee. She has two daughters, Dana (in heaven) and Melinda.