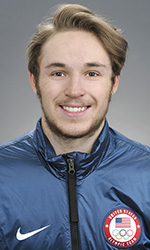 Chris Corning has quickly made a name for himself in both slopestyle and big air. He won his first World Cup in 2015, has two World Championship medals and two World Cup titles, and throws down some of the hardest tricks on the competition circuit. Chris made his first Olympic team in 2018 and just missed the medals with a fourth-place finish in the debut of big air snowboarding.

FIRST TRACKS
Growing up in Denver, Colorado, Corning had the opportunity to start snowboarding at the age of seven. He eventually moved to Silverthorne where he has easy access to resorts such as Keystone, Breckenridge, and Copper Mountain. Before joining U.S. Snowboarding, Corning trained with the Aspen Valley Ski & Snowboard Club.

OFF THE SNOW
When he’s not chasing snow around the globe, Corning likes to get on a dirt bike, skateboard and play frisbee golf.